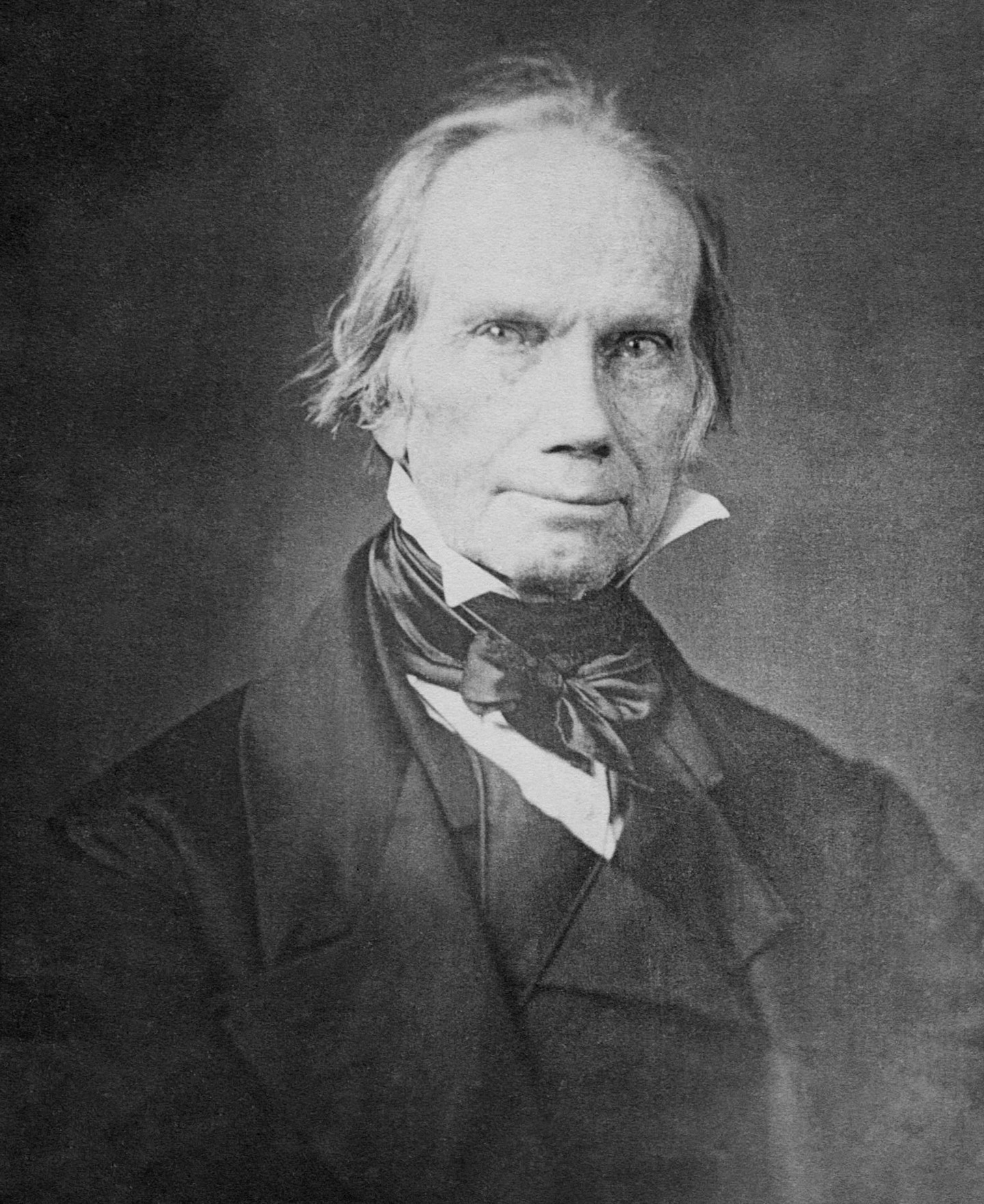 Henry Clay Sr. (April 12, 1777June 29, 1852) was an American attorney and statesman who represented Kentucky in both the U.S. Senate and House of Representatives. He was the seventh House speaker as well as the ninth secretary of state, also receiving electoral votes for president in the 1824, 1832, and 1844 presidential elections. He helped found both the National Republican Party and the Whig Party. For his role in defusing sectional crises, he earned the appellation of the "Great Compromiser" and was part of the "Great Triumvirate" of Congressmen, alongside fellow Whig Daniel Webster and John C. Calhoun.

Clay was born in Hanover County, Virginia, in 1777, beginning his legal career in Lexington, Kentucky, in 1797. As a member of the Democratic-Republican Party, Clay won election to the Kentucky state legislature in 1803 and to the U.S. House of Representatives in 1810. He was chosen as Speaker of the House in early 1811 and, along with President James Madison, led the United States into the War of 1812 against Great Britain. In 1814, he helped negotiate the Treaty of Ghent, which brought an end to the War of 1812, and then after the war, Clay returned to his position as Speaker of the House and developed the American System, which called for federal infrastructure investments, support for the national bank, and high protective tariff rates. In 1820, he helped bring an end to a sectional crisis over slavery by leading the passage of the Missouri Compromise.

Clay finished with the fourth-most electoral votes in the multi-candidate 1824 presidential election, and he helped John Quincy Adams win the contingent election held to select the president. President Adams appointed Clay to the prestigious position of secretary of state; as a result, critics alleged that the two had agreed to a "corrupt bargain". Despite receiving support from Clay and other National Republicans, Adams was defeated by Democrat Andrew Jackson in the 1828 presidential election. Clay won election to the Senate in 1831 and ran as the National Republican nominee in the 1832 presidential election, but he was defeated decisively by President Jackson. After the 1832 election, Clay helped bring an end to the Nullification Crisis by leading passage of the Tariff of 1833. During Jackson's second term, opponents of the president, including Daniel Webster, William Henry Harrison, and himself, created the Whig Party, and through the years, Clay became a leading congressional Whig.

Clay sought the presidency in the 1840 election but was passed over at the Whig National Convention by William Henry Harrison. When Harrison died and his vice president ascended to office, Clay clashed with Harrison's successor, John Tyler, who broke with Clay and other congressional Whigs after taking office upon Harrison's death in 1841. Clay resigned from the Senate in 1842 and won the 1844 Whig presidential nomination, but was narrowly defeated in the general election by Democrat James K. Polk, who made the annexation of the Republic of Texas his issue. Clay strongly criticized the subsequent Mexican–American War and sought the Whig presidential nomination in 1848, but was defeated by General Zachary Taylor who went on to win the election. After returning to the Senate in 1849, Clay played a key role in passing the Compromise of 1850, which postponed a crisis over the status of slavery in the territories. Clay is generally regarded as one of the most important and influential political figures of his era. Provided by Wikipedia
Showing 1 - 3 results of 3 for search 'Clay, Henry, 1777-1852', query time: 0.02s Refine Results
Search Tools: Get RSS Feed — Email this Search