Soviet law and Soviet society : ethical foundations of the Soviet structure, mechanism of the planned economy, duties and rights of peasants and workers, rulers and toilers, the family and the state, Soviet justice, national minorities and their autonomy, the people's democracies and the Soviet pattern for a united world /
by: Guins, George Constantine, 1887-1971
Published: (1981)

Legal controls in the Soviet Union;
by: Boim, Leon
Published: (1966)

The Emancipation of Soviet law /
Published: (1992) 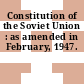 The participation of the Soviet Union in universal international organizations. A political and legal analysis of Soviet strategies and aspirations inside ILO, UNESCO and WHO
by: Osakwe, Christopher, 1942-
Published: (1972)

Soviet Jewry : hearing and markup before the Subcommittee on Human Rights and International Organizations of the Committee on Foreign Affairs and the Commission on Security and Cooperation in Europe, House of Representatives, Ninety-eighth Congress, first session, on H. Con. Res. 63, June 23 and 28, 1983